Since it’s inauguration in 1819 and throughout its centenary history, the Prado National Museum has fulfilled its important mission of preserving, displaying and enriching collections and works of art closely linked to the history of Spain, and they constitute some of the highest manifestations of artistic expression of recognized universal value. 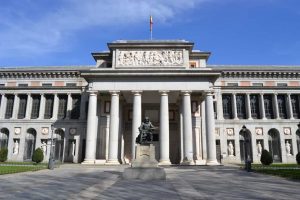 The Prado is one of the most important museums in the world, as well as one of the most visited (ranked 18th for art museums in 2013). It is singularly rich in paintings of European masters from the 16th to the 19th centuries, according to Jonathan Brown, art historian and Hispanist, “Few would dare doubt that it is the most important museum in the world for European painting.”

Its main attraction lies in the works of Velázquez, El Greco, Goya (the most widely represented artist in the museum), Titian, Rubens and Bosco (with the best and most extensive collections in the world), to which can be added paintings from artists as important as Murillo, Ribera, Zurbarán, Rafael, Veronese, Tintoretto, Van Dyck and Poussin, to name the most significant.

Such cultural and artistic heritage requires adequate protection. Moisture affects organic materials more than the temperature. The canvas, oil and wood used as part of the works can be greatly damaged if air humidity is too high or too low throughout the year. The main external loads are the exterior air ventilation for the influx of large numbers of visitors to the exhibitions. The main internal load is the moisture emitted by this public. Both loads are highly variable and the air distribution in large open rooms makes it difficult to control the air humidity.

FISAIR has worked with the consulting engineers for a number of years to modify the humidity conditions and has manufactured specific equipment. Inside the museum, you can find a large number of DIPHUSAIR series isothermal humidifiers and DF series desiccant rotor air dehumidifiers.

Find out more or adjust your settings.

This website uses cookies so that we can provide you with the best user experience possible. Cookie information is stored in your browser and performs functions such as recognising you when you return to our website and helping our team to understand which sections of the website you find most interesting and useful.

Strictly Necessary Cookie should be enabled at all times so that we can save your preferences for cookie settings.

If you disable this cookie, we will not be able to save your preferences. This means that every time you visit this website you will need to enable or disable cookies again.

This website uses Google Analytics to collect anonymous information such as the number of visitors to the site, and the most popular pages.

Please enable Strictly Necessary Cookies first so that we can save your preferences!